An attempt at listing events and various actions.

You can also check the flyers and posters page too.

Join an open discussion occasion for everyone to share their thoughts and ideas.

As part of the 34C3 and the self-organised sessions.[1]

At the beginning of next year, Google plans to open its seventh Google Campus worldwide at the Ohlauer Strasse substation.

Google is not an innocent actor who only moves to Kreuzberg by chance. The company chose the substation because the neighbourhood was discovered as a resource for the tech industry: after the exploitation and transformation of the liberal San Francisco, it is now the turn of liberal Kreuzberg. This development is in its infancy, and it will affect all those who are still living here, but who cannot or do not want to participate in this transformation. That's why we protest against the move-in of Google. 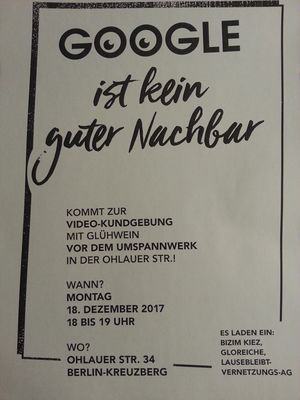 As seen on the GoogleCampusVerhindern blog.[2]