From FuckOffGoogle
Revision as of 11:57, 11 June 2018 by Fog (talk | contribs) (→‎The renovation of the Campus is happening now! Its time for the fight to escalate!)
(diff) ← Older revision | Latest revision (diff) | Newer revision → (diff)
Jump to: navigation, search 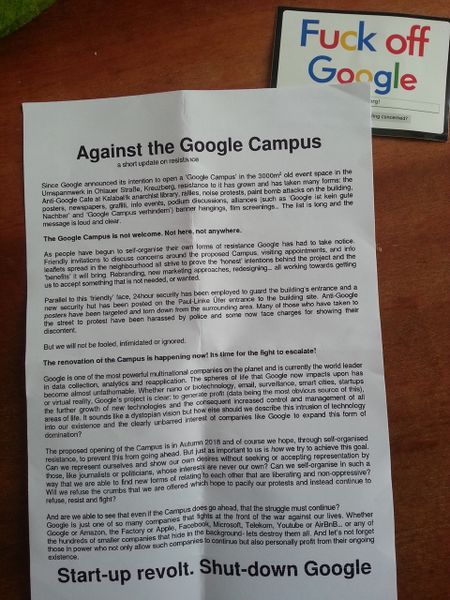 Since Google announced its intention to open a "Google Campus" in the 3000m² old event space in the Umspannwerk in Ohlauer Straße, Kreuzberg, resistance to it has grown and has taken many forms: the Anti-Google Cafe at Kalabal!k anarchist library, rallies, noise protests, paint bomb attacks on the building, posters, newspapers, graffiti, info events, podium discussions, alliances (such as "Google ist kein gute Nachbar" and "Google Campus verhindern") banner hangings, film screenings? The list is long and the message is loud and clear.

The Google Campus is not welcome. Not in Kreuzberg or elsewhere.

As people have begun to self-organise their own forms of resistance Google has had to take notice. Friendly invitations to discuss concerns around the proposed Campus, visiting appointments, and info leaflets spread in the neighbourhood all strive to prove the "honest" intentions behind the project and the "benefits" it will bring. Rebranding, new marketing approaches, redesigning? all working towards getting us to accept something that is not needed, or wanted.

Parallel to this "friendly" face, 24hour security has been employed to guard the building's entrance and a new security hut has been posted on the Paul-Linke Üfer entrance to the building site. Anti-Google posters have been targeted and torn down from the surrounding area. Many of those who have taken to the street to protest have been harassed by police and some now face charges for showing their discontent.

But we will not be fooled, intimidated or ignored.

The renovation of the Campus is happening now! Its time for the fight to escalate!

Google is one of the most powerful multinational companies on the planet and is currently the world leader in data collection, analytics and reapplication. The spheres of life that Google now impacts upon has become almost unfathomable. Whether nano or biotechnology, email, surveillance, smart cities, startups or virtual reality, Google?s project is clear: to generate profit, the further growth of new technologies and the consequent increased control and management of all areas of life. It sounds like a dystopian vision but how else should we describe this intrusion of technology into our existence and the clearly unbarred interest of companies like Google to expand this form of domination?

The proposed opening of the Campus is in Autumn 2018 and of course we hope, through self-organised resistance, to prevent this from going ahead. But just as important to us is how we try to achieve this goal. Can we represent ourselves and show our own desires without seeking or accepting representation by those, like journalists or politicians, whose interests are never our own? Can we self-organise in such a way that we are able to find new forms of relating to each other that are liberating and non-oppressive? Will we refuse the crumbs that we are offered which hope to pacify our protests and instead continue to refuse, resist and fight?

And are we able to see that even if the Campus does go ahead, that the struggle must continue? Google is just one of so many companies that fights at the front of the war against our lives. Whether Google or Amazon, the Factory or Apple, Facebook, Microsoft, Telekom, Youtube or AirBnB? or any of the hundreds of smaller companies that hide in the background- lets destroy them all. And let's not forget those in power who not only allow such companies to continue but also personally profit from their ongoing existence.

Click on a date/time to view the file as it appeared at that time.

There are no pages that link to this file.